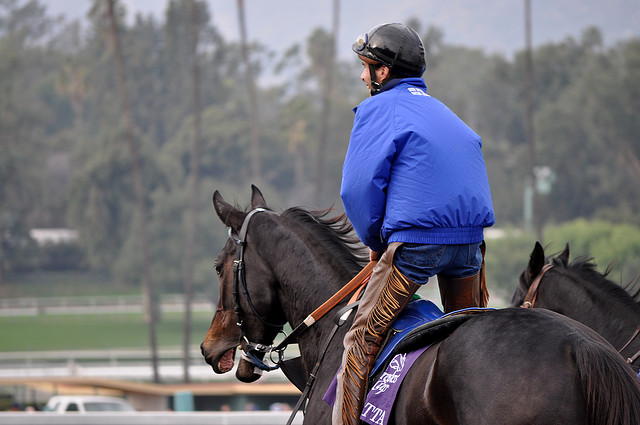 The Distaff is the feature race on the short 4-race Friday Breeders’ Cup card. The Friday Breeders’ Cup races are great; always like to take the afternoon off (same for Kentucky Oaks day) and I highly recommend it. I’m willing to take chances on Friday as long as I have budgeted for my potential plays on Saturday. It is a long event, but you need to jump on opportunities whenever they arise.

The scratch of Beholder immediately changes the complexion of this race. At the outset, I’m against Close Hatches. When these great fillies put in a clunker, I’m cautious moving forward. Royal Delta and Princess of Sylmar come to mind as recent examples. The public tends to hold on for one or two more races, hoping for a rebound, but the torch has passed to another younger filly. That’s enough of a reason to play against her. When it comes to next in line, Untapable is the best 3YO filly in America. The downturn in her speed figures recently is a bit concerning, especially for anyone thinking of her as a potential single. That said, she very well could win this race by open lengths.

Tiz Midnight ran well with Beholder last time out in her Grade 1 debut. I consider her a very strong contender although I worry about a pace battle between here and two-time Grade I winner, Belle Galantey. Don’t Tell Sophia, an 11-time winner who just won the Grade 1 Spinster, looms a decent threat to pick up the pieces from a pace battle. That said, I am always extra cautious betting expected pace — so many things can happen, including human error, that make the unexpected happen.

In that race, she beat Breeders’ Cup Juvenile Turf champion Flotilla and others. However, she was humbled in G1 company next out. She ran well in her two starts over the summer, including a strong second in the Duke of Cambridge Stakes. Dirt is a question; she has run well on synthetics. I’ll be listening to the buzz around her all week, but she certainly will be on all tickets. Unbridled Forever will most likely hit the board, but will not win. Dallas Stewart, a fine trainer otherwise, has only had two horses win graded stakes in 63 tries. However, 17 of these starters have been in the money. Finally, Ria Antonia deserves a mention, but not much more. Its been a bizarre tale for this horse that has not crossed the finish line first since her maiden at Woodbine in the summer of 2013. It’s a weak division, but a win by her, while possible, would still be quite a surprise.

My early feelings about this race is that it is a spread race.This means that I don’t feel there’s an overwhelming favorite, and I’m not convinced in the superiority of the contenders over the rest of the field. As a result, I will likely cover horse contenders in multi-race wagers (final tickets will be released on Thursday, October 31). However, I will not have either Close Hatches or Unbridled Forever on my tickets to win, and instead, will likely spread with every other horse under 30-1 in multi-race wagers. I also may play L’Amour De La Vie to win at 10-1 or more, depending on post and bias. But I won’t play her at 30-1 or over.

L’Amour De La Vie is above 30-1, which is over the acceptable range for a win bet. If she goes well under, the bet will stay the same, but I’ll assume that I’m the one making the mistake when they are that high. I don’t love her, but I don’t love much in this race. So, I still like her underneath, if she likes the turf (a decent if). I’ll start with a small $25 tilt avoiding win bet — if she does win, I don’t want to spend the rest of the weekend chasing the missed profits. I’ll add a $51 straight exacta with Untapable/L’Amour De La Vie. With the remaining $24, I’ll do 4 $6 exactas with L’Amour De La Vie in second (under Don’t Tell Sophia, Ria Antonia, Tiz Midnight, Iotopa.) If she takes to the dirt — a risk – and runs to potential – then the bet should pay.