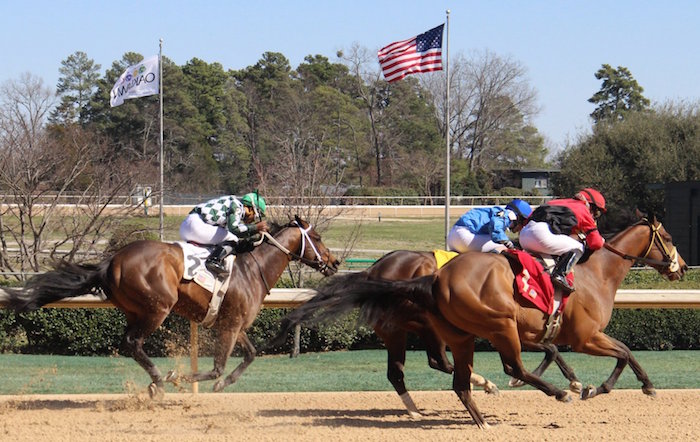 I watched the 2006 Pimlico special from an unfurnished living room in South Burlington, VT.  We saw the U.S. debut of Invasor, who would later go on to win the 2006 Breeders’ Cup Classic, 2007 Dubai World Cup, and be named Horse of the Year. https://www.youtube.com/watch?v=HCydlbYkGM0

I’m not sure there’s a horse of Invasor’s stature in here, but there are some nice looking classic division colts.  The race begins with Revolutionary (#6, 5-2) who was 3rd last year in the Derby behind Orb.  Since then, he looked dull in the Donn but raced well in the Oaklawn Handicap, finishing behind Will Take Charge.  Revolutionary is fast enough to win here and he should like this distance.  But he has a knack for inconsistency and, while he’s the best on paper, he doesn’t dominate the field.

Moreno (#3, 7-2) wants the lead, but there will be competition for it — I’d be surprised if he didn’t fold off the board in the final 100 yards.  Golden Lad (#4, 6-1)  and Valid (#1, 10-1) also have designs on it.  Valid is taking a step up in class, but ran the best race of his life routing in the mud at Gulfstream.  I expect his price to drop.  Cat Burglar (#2, 4-1) has earned this shot.  He’s raced well in Southern California, but he’d need to improve to find the winner’s circle here. Carve (#5, 5-1) is trained by Brad Cox, who has been on fire lately.  The horse is making his third start of the layoff and has a versatile off-the-pace style. Prayer for Relief (#8, 12-1) is getting a bit long in the tooth.  He’d need to find past speed for it to happen.  It’s not unheard of for that to happen with the recent switch to Dale Romans.  He could be a factor if others don’t move forward.

Revolutionary will be the likely favorite, but he is unreliable.  He certainly is a strong contender, but the price should lead you elsewhere.  Carve has always had potential and has been realizing it lately.  With a decent price around 5-1, he could be a very nice pick.   Valid deserves some consideration, especially if he floats over 10-1.

Our first trip to Southern California brings us to the 6th race at Santa Anita.  It kicks off the late Pick 3 and is the second leg of the late Pick 4.  A straight claiming race, every horse in the race can be purchased for $12,500.  This insures a bit more parity, as few trainers would be willing to give a horse away for a bargain.  A well-placed horse often suggests a trainer going for a victory here and willing to risk the loss of the horse to a rival owner.  The original owner keeps all the winnings from this race.  Understanding the small moves is essential to profiting and having a fun time playing these sort of races.

The favorite is Fit to Rule (#2, 9/5), coming off a wins  at the $16K and $8K level.  He comes off the claim, and appears sharp.  Cook Inlet (#8, 2-1), a Jerry Hollendorfer trained gelding ridden by Rafael Bejarano.  After switching barns a bit, he returns to a level where he’s won before, albeit on the artificial Hollywood surface (Santa Anita is dirt).  He’s a solid horse, does have a fast dirt performance on his resume, but he doesn’t overwhelm the field.  Graeme Crackerjack (#6, 5-1), moves to the Jeff Bonde barn.  He’s moving slightly up in price (from $10K) and is removing blinkers.   Tuckers Point (I keep picturing the Meth Addict #1 in Breaking Badyelling constantly for Tucker) (#5, 8-1) moves up from a $8K claim into the barn of Dean Greenman, who doesn’t excel off the claim.  Twin Six (#1, 4-1) is another coming off a claim.  Fast enough, he’s won 2 of 3 at this distance. A few turf horses, probably in here for sharpening (running on dirt to get horse to be more involved in next turf race), Cloud Hopper (#3, 12-1) and Sharp Richard (#4,10-1) are here as well.  Trucial State (#7, 20-1) is another outsider.

There might be a little more pace than Fit to Rule likes (both previous races were at a slow pace). The safest bet — in a race with lots of question marks — appears to be class-dropping Cook Inlet, who has shown success at this level and the speed on dirt.  A deep closer could be in the works as well — at the very least to hit the board.

Fit to Rule was the best.  He controlled the pace and he remained razor sharp.  Cook Inlet who went off as the favorite rallied to be second, but couldn’t get to the much-the-best winner, who paid $6.80.  Fit to Rule goes to the barn of Peter Miller, where we will likely seem him in a lower-level claiming race in Southern California again soon.