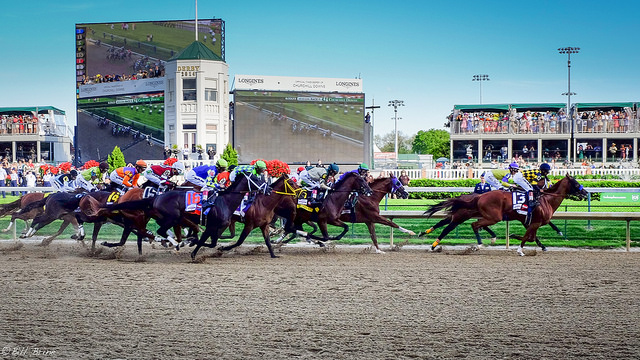 [A few weeks back, Bob Schless penned a very timely article on the hottest freshman sire, Super Saver. WIll he become the first Kentucky Derby winner since Unbridled to sire a Kentucky Derby Winner? Great, detailed analysis as usual. SA]

To win a Kentucky Derby, you have to be a well-rounded individual–a horse with the speed, stamina, stoutness, and physical courage not only to withstand the rigors of training for that race, but also to win it. Super Saver embodied this. He also has some great attributes to offer as a sire as well: a talented career on the track; a superb female family with bloodlines full of class and stamina; a sire that gave off horses possessing good size and scope, quality and strength, and a balanced look that contributes to their athleticism. Super Saver is off to a hot start at stud, ranking among the nation’s best Freshman Sires of 2014. He already has 3 impressive winners out of 13 starters this summer, and by looking at the top notch mares Win Star Farms has bred him to there is a lot to like about their ability to get better as the distance gets longer. Also, owners paid an average of $100,803 for his yearlings in 2013 so they must look pretty nice in the sales ring. Trainer Mark Cassie said in April, 2014,”Everyone is looking at these Super Saver’s-We’re always looking for Derby-type horses.”  I know it’s extremely early but Super Saver has every right to give out another Kentucky Derby Champion somewhere down the line. Let’s examine it.

Super Saver’s racing career was filled with highs and lows. He began his career breaking his maiden in his second attempt in a mile MSW race at Belmont by an impressive 7 lengths. In his first two-turn race he broke a stakes record at Churchill Downs in The Kentucky Jockey Club Stakes for 2 year olds, clocking a mile and sixteenth in a time of 1:42.83 and winning from gate to wire  by 5 lengths. The previous mark was held by Captain Steve in 1999. The pinnacle of his career came at 3 in The Kentucky Derby. Going off with odds of 9-1, he came from 6th place to skim the rail on a muddy track and win by 2 1/2 lengths. This was his Jockey’s Calvin Borel’s 3rd Kentucky Derby winner in the previous four years. It was also his trainer’s first Kentucky Derby win in 24 tries. Pletcher said after the race, “I’m always asked: Have you won the Kentucky Derby? Now I look forward to answering it. ” He also said this about the race, “Something that was overlooked in the Derby is that everyone made it out to be that this horse didn’t get a great trip and that horse didn’t get a good trip.  Super Saver was able to get a great trip because he was able to put himself in all the right spots and every time Calvin needed him to do something, he did it.” In the Preakness, Super Saver lugged home a disappointing eighth. It was the worst Preakness finish by a Kentucky Derby Winner in 4 decades. He followed that up with a 4th place finish in the Haskell and a 10th place finish in The Travers. After the race Super Saver underwent a full veterinary exam, which showed that the colt had bruising and inflammation in all four of his cannon bones. Win Star decided to retire him with Elliot Walden saying,“The final decision to retire Super Saver was a difficult one that may not be popular with fans but should be very popular with our breeders. The bone bruising, discovered by Dr. Larry Bramlage DVM, which limited his performance during the latter half of this year should subside with time. However, it created a slight risk that he would not return to the form he showed as a two year old and through the Kentucky Derby. He has nothing more to prove.”  He ended his career with 10 starts: 3 wins, 2 place, 1 show with earnings of $1,889,766. Now let’s look at Super Saver’s pedigree, which in my eyes is a royal one.

When your half-brother goes for $1.7 Million at the 2013 Keenland September Sale, you know you possess a superb pedigree. Super Saver’s female family is a direct descendant of *La Troienne, the most influential mare of the twentieth century. His dam, Supercharger, hails from the classy Phipps Family and is a full sister to Grade 1 winner and young sire Girolamo, as well as She’s a Winner, dam of Grade 1 winner and sire Bluegrass Cat. She is also a full sister to Grade 2 winner Lord of the Game, stakes winner Sonoma Cat, Grade 2-placed Cal Nation, Grade 2 winner Daydreaming (Dam of Imagining) and Grade 3 winner Accelerator. Finally, she is the dam of Grade 3 winner Brethren. His granddam, Get Lucky, won the Grade 3 Affectionately Handicap and is a full sister to Travers winner Rhythm. Dance Number, the third dam, won the Grade 1 Beldame and is a half-sister to the Multiple Grade 1 route winner Private Account (sire of undefeated Personal Ensign). Fourth dam Numbered Account was a Champion Juvenile Filly of 1971 and equaled a Keenland track record for 9 furlongs on dirt. So as you can see Super Saver hails from mares of class and stamina. His dam sire is the hall of famer A.P. Indy, who won the Belmont and Breeders’ Cup Classic and sired Rags to Riches, The 2007 Belmont Winner. His 2nd dam sire is Seattle Slew, the great Triple Crown Winner. His 3rd dam sire Bold Reasoning’s breeding career was short lived but he did sire Seattle Slew. Looking at this group of dam sires you can understand how Super Saver was able to get the classic distance of the Derby. Finally, his sire was the great Marias Mon. Her racing career was short lived (she was the Champion Juvenile of 1995) but she was very successful as a sire, knowing to put a lot of stamina in to her horses. Besides Super Saver, Marias Mon also sired 2001 Kentucky Derby Winner Monarchos, who ran the 2nd fastest winning time in the history of the race. This is a rarity in this sport (to sire 2 Kentucky Derby winners). So by taking in Super Saver’s pedigree, one can see that he is giving off a lot of stamina from top to bottom and the mares on his distaff side feed him with class.

I Spent It (Super Saver-Rateeba by Sky Mesa)

I Spent It broke his maiden at first asking on July 2 in a 5F MSW at Belmont Park, getting up late and winning by 3/4 lengths. He is trained by Anthony Dutrow and was ridden by Javier Castellano. His time was 58:11. His win was the first one for Super Saver as a sire. He is also Super Saver’s 3rd most expensive 2-year-old sold at auction this year, at the price of $600,000. Video:

I Spent it comes from a pretty classy group of mares on his dam side and his dam sires give him a good amount of stamina as well. In my estimation not only does I Spent It have the right to go long and eventually achieve success at classic distances but he is inbred to A.P. Indy on a 3SX4D cross as well as Mr. Prospector on a 4SX4DX5D cross. Impressive stuff.

Competitive Edge broke his maiden as well at first asking in a dominating performance going 6 furlongs in a MSW on July 26 at Saratoga, winning by 10 1/4 lengths. He is trained by Todd Pletcher and ridden by John Velazquez. Pletcher said after the race, “He has never disappointed us in anything that he has done, literally, from the first time we breezed him. He continually showed us he’s a very talented colt, and every time we did something with him it was impressive. So we had high hopes coming into today. You never know when you run one for the first time. We were impressed, but not surprised”. They are pointing the $750,000 2-year-old purchase to the Grade 1, $350,000 Hopeful on September 1.

Here is another Super Saver that has stakes winning mares and ones that are connected with great company. Also, by looking at this dam sire line you can make a nice argument that running longer distances shouldn’t be a problem for Competitive Edge. He too has many crosses in his bloodlines: 4S x 4D Seattle Slew, 4S x 4D Mr. Prospector, 5S x 5D Buckpasser, 5S x 5D Secretariat, 5S x 5D Northern Dancer. Now there’s a major boost of distance.

Conclusion: When looking at Super Saver as a sire, what not only impresses me is his pedigree and his professionalism but the type of yearlings he is shooting out that are being bought up at big numbers at auction. They must be very attractive to the bloodstock agents, pinhookers, trainers and owners to be selling the way they are. I am not surprised given the qualities that Super Saver possesses and the classy mares Win Star Farms have collected for him to breed to. Although Super Saver seems to have been bred with stamina on both sides of his family, Todd Pletcher was quoted as saying that Super Saver, “was the fastest 2 year old I ever trained”. The brilliance is evident. Once again it is early, but I’m under the belief that the potential for Super Saver to sire a Kentucky Derby Winner is there. And I think it can happen sooner rather then later because he is being bred to the best of the best right out of the starting gate.