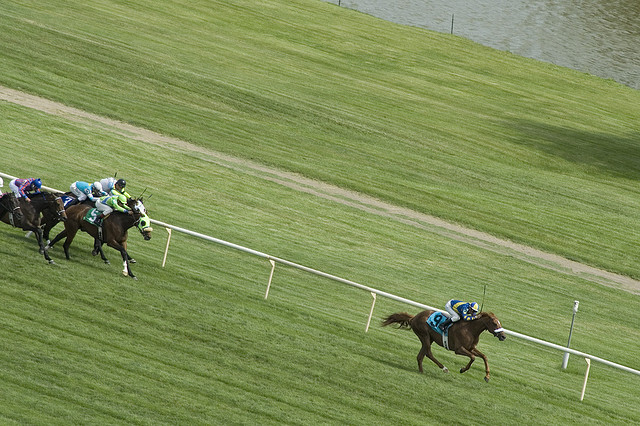 Today, it’s the fourth of twelve maiden races I’m covering this week.  You can see the full schedule here:

Prince Warrior (#1, 7/2) enters the Conor Murphy barn after making up some ground against straight maidens at Tampa and Gulfstream. The company should be easier today — although neither of these, especially Gulfstream in the summer, is top level. Kilted (#2, 9/2) was outrun early at 5f last time out, but stretches out today for the first time on the turf. At a decent price, this is a bit of potentially positive uncertainty.  He’ll need to improve significantly, but there’s reason to believe that he can. Risk and Return (#3, 5/2) has the highest turf speed so far. But the connections aren’t inspiring, and I tend not to like any offspring of  Kitten’s Joy that isn’t campaigned by the Ramseys. They tend to be overbet by the public.  Gata Yat (#5, 6-1) is making a consecutive start for the first time in almost 2 years.  Still seems a race away, but worth a look.  My Man Mumbles (#6, 15-1) has some terrible workouts. Maragon (#8, 4-1) and Freedom Peace Love (#4, 6-1) would need slow races by everyone else to have a shot. Typically, those are bad bets.

Selection: I’ll take the upside with Kilted at 4/1 or better. Prince Warrior is the major threat.