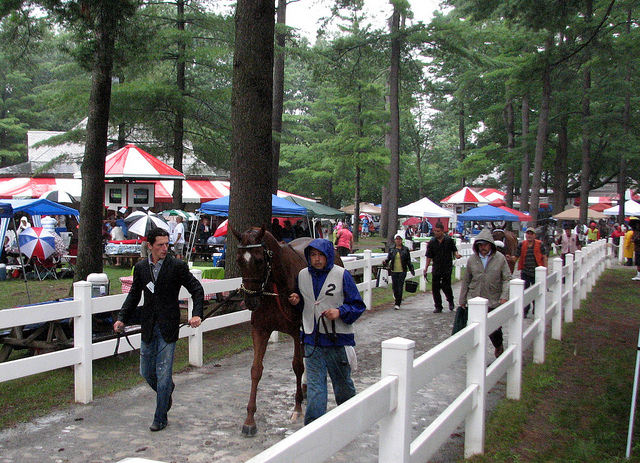 [Billy Blake is back with his weekly Saratoga Late Pick 4. Great sequence. For those wanting to spend a little less, I’ve added my singles after each of Billy’s plays. Good luck! SA]

We cashed in last week with a chalky sequence, but I’ll never complain about a winning ticket. Two of the horses we were live to in the finale last Saturday were paying over $400 for the Pick Four, but we got three times our money back for a $60 ticket.

The Whitney Day Late Pick Four includes a guaranteed pool of $750,000 with three Grade I races in the mix. It’s a tougher sequence than seven days ago, and there’s a chance of rain on Saturday. Here’s the play:

The Vanderbilt begins the Grade I action on Saturday, and there is tons of speed signed on in here.  Happy My Way (#5) looks like the speed of the speed on paper and Joe Bravo should be sending him. He’s posted three digit Beyers in his last five starts, but this field won’t be easy to fend off. The top two from the True North, Palace (#1) and Bakken (#8), are the ones I prefer most in the Vanderbilt. Bakken is a lightly raced horse from the Chad Brown barn and is second off the layoff. Palace shows up every single time he runs, and he was beaten by one of the top sprinters in the country last out who set a track record at Belmont. In addition, Bahamian Squall (#4) comes into the Vanderbilt second off a layoff and ran second in the 2013 edition of this race at Saratoga. He reunites with Luis Saez and is 8-1 on the morning line.

Seth’s single:  I love Bakken (#8) here. He’s just a bit faster than these and had excuses with a wicked pace in the True North.

The Test is a super competitive race with eleven horses set to go. Early reports are Princess Violet will scratch, so each horse will slide down a stall in the starting gate. Fiftyshadesofgold (#2) breaks from the rail, but I think she will appreciate the turn back to seven furlongs after a fourth place finish in the one mile Acorn. Four consecutive bullet workouts going into the Test suggest trainer Bret Calhoun has her ready to roll. It’s impossible to talk about the Test without bringing up Sweet Reason (#7). She showed in the Acorn that she’s a different animal going around one turn. I’m not expecting 3-1 on her by post time, but she’s the one to beat and a favorite I’m not leaving off the ticket. One horse that intrigues me is Tea Time (#9). She’s won her last two and put up a 94 Beyer last out at Delaware. The Test is a jump in class, but the price will be right. I could easily use a few more horses, but I’m trying to get through with these three to go a little deeper in the last two legs.

Seth’s single:  I want a classy sprinter in this race. That’s what the “test” is. Southern Honey #5 fits the bill perfectly.

Now the richest race at Saratoga, the Whitney starts and ends withPalace Malice (#5). You can’t say enough about his performance in the Met Mile, and now he gets back to an ideal distance of one mile and an eighth. He’s put his issues at the gate to rest as a four-year-old as he attempts to go 5-for-5 in 2014. While he’s clearly the pick, I’d be cautious about singling him in multi race wagers. Will Take Charge (#1) gets back to the track where he made a name for himself as a three-year-old. Luis Saez gets the mount back, and those two together haven’t been worse than second. I know trainer D Wayne Lukas isn’t crazy about the inside post, but Will Take Charge belongs in the ‘A’ group when discussing the Whitney. Departing (#6) finished third in the Stephen Foster, but he relishes the mile and an eighth. He’s got three wins to his name in six career starts at the distance. Of the few horses making their Saratoga debut in the Whitney, he’s the one I want the most. I’m not going to pull the plug on Romansh (#7) just yet. He ran well in the Met Mile, but couldn’t get it done as the favorite in the Suburban. If the real Romansh shows up, he’s got as good a shot as the rest of them. The upside in the Whitney is he will offer value.

Seth’s single: Yes, Palace Malice is the top horse in training, but my eyes popped when I saw Itsmyluckyday (#4) at 12-1 here. The 2013 Preakness runner-up returns to Grade I company after racing well at Monmouth park. At his best, he can run with anyone in the country.

Saturday’s finale is tricky to handicap because we don’t know what the weather conditions will be like. However, I’m assuming the race is on the turf. Big Blue Kitten (#4) hasn’t run since the Breeders’ Cup, but he’s 2-for-2 at Saratoga. I think he’s vulnerable off a layoff. However, he loves it at the Spa. Legendary (#5) comes out of a win in an optional claimer and turns back to one mile and one sixteenth. Worth noting that the win was over a yielding turf course, which enhances his chances if the turf isn’t firm by post time. Plainview (#6) should be on the lead and like Big Blue Kitten, is undefeated at Saratoga. Villandry (#8) has been wide in his last two starts and the added sixteenth will help his cause. Lastly, Kharafa (#12) is too consistent to not use. Outside post is a setback, but he’s in the good hands of Javier Castellano.

Seth’s Single: Toughest race of the sequence with class all over the place. Tempted by Plainview, but Big Blue Kitten (#4) is just better than these. The distance isn’t right, but this horse loves to win and may even give slight value.

Billy:  “I’m now using #5 Happy My Way in Vanderbilt and #2 Swift Warrior in the finale.”

Seth: “With Bakken scratched, it’s a tougher single. But I’ll go with Bahamian Squall shipping  in from Gulfstream Park. Good chance, and may be 6-1.”

Image: Bob is traveling. “Walking the horse from the Track.” Copyright 2010.