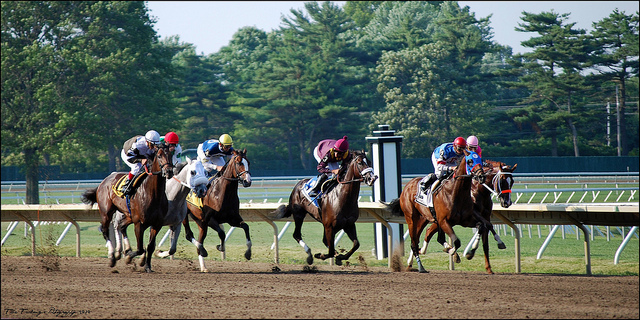 Searching for Summer Value: Maidens by the Dozen

Saratoga and Del Mar are fun meets. The fields are deep, the connections are typically solid, and horses are usually well-meant. Everybody wants to spend a few minutes in the respective winner’s circle. As a result, eliminations —  horses that rank nothing more than a “true longshot chance” — are much more difficult to find.  But, while these marquee meets proceed, value opportunities in beatable races still abound around the country. One place to find these value opportunities is in lower-level maiden races, where you can often eliminate a sizable portion of the field and also find many false (as well as legitimate) favorites.

As a counter to the big-money meets, I’m going to focus on finding value in these types of races this week (and probably next). I’m making my own card of twelve maiden races from the next four days. You’ll notice I’ve highlighted the purse value in the race below.  This often serves as a great proxy for comparing different levels of maidens. Here the schedule for the rest of this week:

Wednesday, August 6: Mountaineer Race Track can be a rewarding venue for those who pay careful attention to small gradations in class. I’ll focus on:

Thursday, August 7: I’ll take a quick dive into Arlington Park for one of my favorite levels:

Saturday, August 9: Ellis Park has maidens galore on Saturday.  Five maiden races from the across the spectrum, including:

(and, of course, the GIII Gardenia Stakes for those who want to play something other than maidens!)