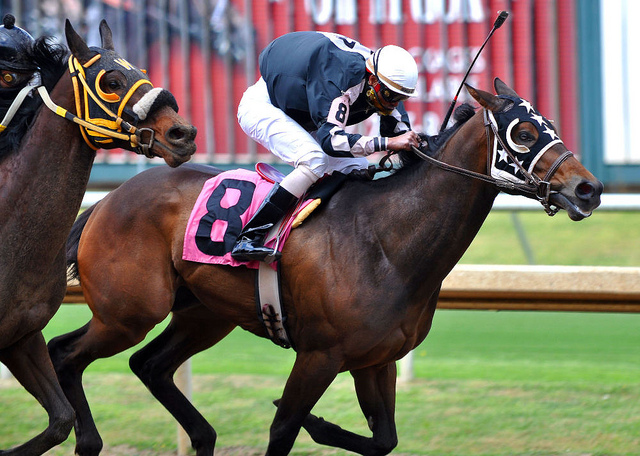 Day One: Maiden Races at the Mountain

Today is the first day of my value-driven dozen maiden races that I described here.  I chose a variety of maiden races from “other” tracks (not Saratoga/not Del Mar) — looking for a few cards that had several. I haven’t previewed the races before selecting them, so we’ll see if there’s value. Based on the type of race, however, I’m hopeful that we’ll find it.

Pencil Pusher (#2, 6/1) returns to the right level and surface after a conditioning foray for trainer Edward Clouston. It’s a weak race and should fit well with a fit horse. Should be a nice price.  Distinct Spirit (#3, 7/2) is 0 for 34 and has already spent significant time at this level. Certainly possible, but these types are terrible bets. Heat Box (#7, 3/1) drops from showing from brief speed against allowance maidens. A contender, but the merits are obvious to the public.

Selection: Pencil Pusher at 7/2 or better.

Harold Jordan seems to have a two-horse stable, and both are entered here.  Of the two, Harlan’s Affair (#1, 9/5) has shown decent enough speed to win here. He’s the fastest so far in the field, but I’m not sure the distance is right. Still a strong chance, however. Guera Rachera (#3, 10/1) woke up in her last start, making a nice middle move at Belterra Park. Lacey the Spartan (#7, 5/1) makes the second start off the claim for Israel Garcia. Might be a tad bit too slow, but certainly figures with these connections. Brooks Gift (#8, 2/1) was sharp first time for Burley Clouston. A bit easier pace today should find the winner’s circle.

Selection:  This is a race that is very odds dependent. I expect the public to bet Brooks Gift heavily, although Lacey the Spartan could get a large amount of support. It’s also difficult to predict what the public will do with the entry — and which one goes. That said, I’ll play Brooks Gift at 5/2 or greater, which I don’t expect. I might also look at playing Guera Ranchera underneath, depending on payouts.

Tiztactical (#1, 5/2) ran a solid race off the long layoff last time out.  The trainer’s percentages are low, but it’s a small sample, and his horse’s typically run well. Il Mangia Troppo (#2, 7/2) adds blinkers, but has been a bit short at this level. Prestigious Cat (#3, 6-1) moves off the turf after his debut. Throw out the last — this horse very well may be much better than we saw. Also throw out the last for Cute Boy (#4, 3-1), who figures on the return to dirt. Still, it’s quite difficult to claim at $5K and win at the maiden allowance level. Twisted Zing (#5, 12-1) has reason to improve with the stretchout and had an excuse with his bad start last race at the wrong distance. He may very well be over 20-1. Tip of the Hat (#6, 9/2) has sufficient back speed, but hasn’t shown anything in the Clark barn. Most likely, he’ll be overbet.

Selection:  This is the deepest race of the three and multi-race wagers should probably reflect this fact. I don’t think I’ll find value on Tiztactical, even with the plethora of contenders.  Instead, I’ll split a win bet between two likely longshots — Prestigious Cat and Twisted Zing.

Update: Twisted Zing is scratched. On another look, I’ve really warmed to Tiztactical as a legitimate favorite and will also single him in a P5.

Off the turf at Delaware, so I’ll be covering the 7th race, an overnight stakes for sprinting fillies and mares on the dirt. The 5 and the 7 are scratched. Here’s what you need to know:

Geeky Gorgeous stands out on paper and, with some other contenders, I’d like to see her price rise to 4/1.  If she’s a heavy favorite (say 8/5), I’d try to beat her, likely with a split win bet between Quiet Hour and Ms. Cruisen.

Tune in @alldayracing for live coverage starting at about 1:45 p.m.!

Jump on your mobile smartphone (or computer) at the end of the day and watch the 1st from Presque Isle Downs with All Day Racing.  It’s a maiden allowance to kick off the card.  Here’s what you need to know:

What I’m thinking of wagering: