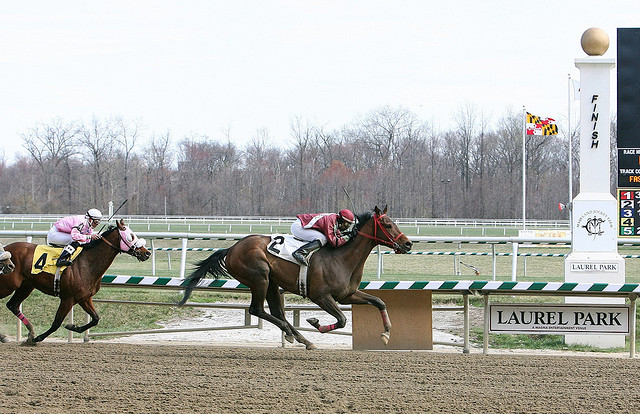 [Rich Halvey (@rich_halvey) has been around this game for a long-time — over forty years. This experience really comes through in his writing about racing. Definitely check out his blog halveyonhorseracing.com for consistent sharp insight. Long before the era of blogs, he authored “The Condition Sign,” one of the few books written about form and, specifically, “how to identify a unique and uncommon longshot form cycle.” Indeed, form can be notoriously difficult to discern on paper, but often offers tremendous value on horses. He discusses the main arguments of the book here. Enjoy! SA.]

The Condition Sign (now sadly out of print) identified horses that show sudden, dramatic, and positive changes in running style sufficient to conclude they are ready to run their best race. Why it happens – maybe the horse fully recovered from a slight injury, maybe a change in feed or medication, maybe he finally got his horseshoes fitting properly – is not as important as accurately recognizing the pattern.

Here is an abbreviated version of The Condition Sign.

Let’s look at the 6th race at Belmont Park on June 10, 2011. The race was a six furlong affair on the inner turf for state bred maidens. The field, to say the least, was poor. In a nine horse field there were two first-time starters, one horse with five starts and no other horse with less than 10 starts. The crowd volleyed favoritism between the number three, Lucy Stragmore by virtue of having finished third twice and fourth three times in her five starts, the last of which was in a seven furlong race on the yielding turf, and the six horse, Juliann’s Approval, a 14-start maiden that finished second last out in that same seven furlong turf event.

Why it happens . . . is not as important as accurately recognizing the pattern.

Also coming out of that race was the seven, Persky’s Heart. While I have often opined that any maiden with more than 10 starts is a risky proposition, the one exception to that guideline is a maiden that reverses bad form because of some obvious change – a move to a lesser circuit, change in surface, change in distance or change in running style. In her opening six starts on the inner dirt at Aqueduct, Persky’s Heart never finished closer than 12½ lengths. The trainer then put her on the Belmont turf and she showed something she hadn’t showed before – speed and interest in running. This is the sort of dramatic change we are looking for, and it appeared to be a result of moving to the turf. The race on April 30 was obviously not her best distance, but for six furlongs she held the lead in a respectable time for state-bred maidens. Two weeks later she was back on the turf at six furlongs and ran a perfect condition race – early speed and heart in the stretch. She returned eight days later and although the distance was a furlong more and the track yielding (she had previously shown a distaste for the moist going), she was deserving of a condition sign play. The combination of negative factors kept her out of the money (at 44-1) but still made her a prime bet as a deferredcondition sign IF she returned quickly and at the right distance. Look at that race on May 22 closely. She broke on top from the 11 post, held her speed to the six furlong marker, and only lost two lengths in the stretch. Surely this horse was primed for her best effort next out. Sure enough, 19 days later she appeared in the aforementioned state-bred maiden, going off at a juicy 26-1 (the lowest odds of her career) and returning $55.50 to win, triggering an $839 exacta with one of the first time starters, and heading a $5,562 trifecta. You don’t need many of these races every year to stay healthy.

Let’s look at the condition sign angles applicable to the June 10 race: