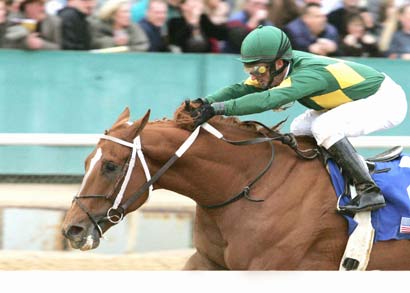 You can often find value in these late season three-year-old stakes races, often simply by betting against horses that ran in the Triple Crown.  The public recognizes the name and overbets on this reason alone.  This strategy, however, still requires finding either a late developing three-year old.  Often, you can find them in horses that may have missed the Triple Crown due to injury, but usually you can find them in stamina horses that are now beginning to fully develop.  I like to demand recent form and speed, however.  Betting simply on the hope of improvement is a recipe for losses.

I like Embellishing Bob at anywhere over 3-1.  I expect that you’ll get this price on the likely second choice as Vicar’s in Trouble will likely get tons of action.  Six Spot deserves a look if the track is wet.   I haven’t seen enough speed from Charge Now to support him here.  I’ve heard Travers for him, but I’ll wait to see more.

Tune in on Twitter at 10:00 ET on Saturday night for coverage of the full slate of Stakes races from Prairie Meadows.  See you then!

Here’s the schedule for the week of June 23- June 28 at All Day Racing:

Saturday, June 28:  IOWA DERBY, Prairie Meadows.  Details to follow later in week.  Let’s kick off the second-half of the season for 3-year olds!  Check out detailed preview available Friday!  Let’s pick up where the Triple Crown left off!  Full coverage of all Stakes on the Prairie Meadows card live on Saturday evening on Twitter.  Don’t make other plans — this is always an exciting night — or at least, bring your smartphone with you!

And, of course, a bunch of other handicapping and racing content on the site and on twitter at @alldayracing!