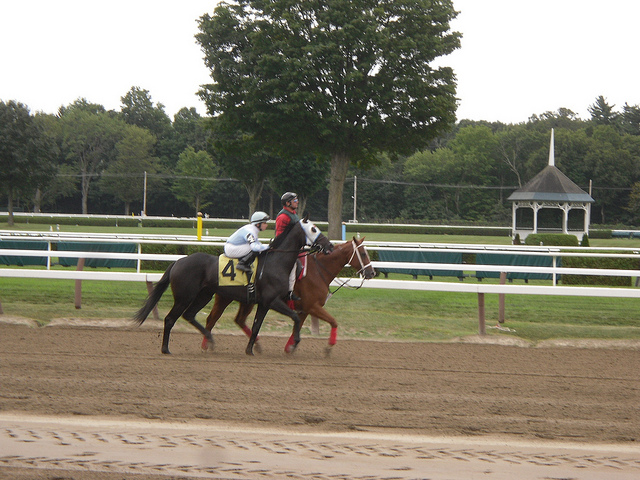 The bad weather has passed, and the turf is firm at Belmont Park. Today’s race of the day is for maidens (horses that have yet to win a race) and on the Belmont Outer Turf course.  Belmont has two turf courses, which enables the running of many turf races. I think it’s the best top-to-bottom turf racing in North America (although a good argument can often be made for Southern California racing or the Keeneland meet as well.)  The races often have deep story lines and often present good betting opportunities.

The morning line favorite here is Lady Kressa (#9, 3-1), a David Donk trainee ridden by the quite turf-capable, Irad Ortiz Jr.  Lady Kressa, a three-year old filly out of value turf sire, Stonesider, looks the part on paper with some great works, with one bit exception — neither Stonesider nor Donk has ever had a first time turf runner win.  Now, that doesn’t mean she can’t win, (see The Black Swan) but it does raise some questions.  Is there anywhere else to go?

Eddy’s Time (#3, 7/2) looked good off the layoff and could improve the second time back. She struggled in a paceless affair back in November, but should be a factor today.  Baby B (#4, 6/1) should be a pace factor, but would need to improve to find the winner’s circle today.  Tenacious Indeed (#6, 20-1) garners a deeper look.  Throw out that last start, as he tries turf and routing for the first time.  He’s unlikely, but threatens a possibility in an open race.  Piccolo Flats (#7, 12-1) moves from the Chad Brown barn and tries turf.  I think if he had turf prowess Brown would have tried it.  Sleek (#8, 6-1) is intriguing.  She routes for the first time on turf off a layoff for a trainer, Michael Hushion, that excels at both angles.  Jose Ortiz get the mount.   Nile Empress(#9, 4-1) tries grass for the first time for the Chad Brown barn.  He’d need to improve quite a bit to win and probably will be overbet.  The final contender is Laurenmychannelgirl (#10, 8-1) with the very capable apprentice, Taylor Rice.  A daughter of Afleet Alex, she’s bred to route and tries it for the first time for her aunt, Linda Rice.  Linda Rice’s horse typically need a race to get into shape, but this one still demands a second look.

Lady Kressa looks good on paper, but she’s still a first time starter in a competitive field.  It’s tough to win first time out — even tougher when there are other strong contenders as there are here.  Sleek would need to improve, but that seems quite possible.  Eddy’s Time is, perhaps, the safest bet — a good performance is likely and she’s fast enough to win.

We’ll be on at 5:10 p.m. ET on twitter @alldayracing with a detailed look at prices