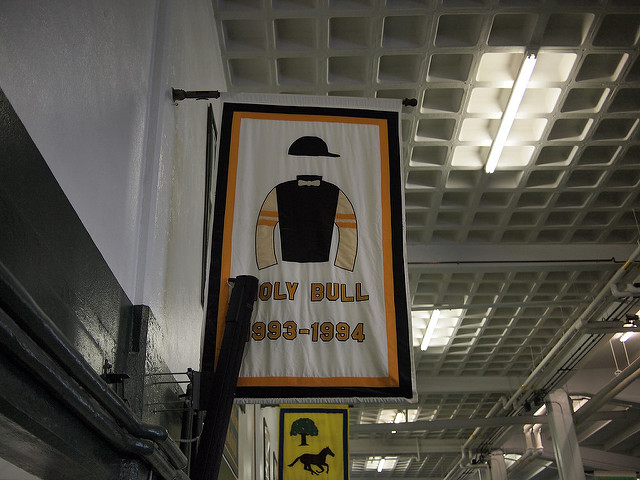 The Derby Trail is picking up with 3 points races this week — the Withers, The Holy Bull, and the Robert B. Lewis. The focus is Gulfstream for the second week in a row; We’ll visit some returning friends in a competitive edition of the Holy Bull. The Holy Bull, a Grade II is 8.5 furlongs and starts viciously close to the turn and a decided disadvantage. Mississippi has scratched and will run in an allowance on Sunday, rather than start from an outside post. Hollywood Star has also scratched.

Here are the horses with a chance:

Enticed: Godolphin-owned colt that won a slow Kentucky Jockey Club Stakes at Churchill in the fall. He beat Tiz Mischief by a head and many think these are the top two horses, despite the layoffs. Enticed could eventually be the best horse in the field, but will it be today? He’s a very strong contender for the win spot; don’t expect good odds at all — he’s a very logical place to land.

Free Drop Billy: A grade 1 winner in the Breeders’ Futurity, but then well up the track in the Breeders’ Cup Juvenile. If we get that horse from the G1 win, he certainly can compete for the top spot. A fast pace would help.

Master Manipulator: Trained by Eric Guillot, he needed a soft pace to break his maiden on the lead. Guillot can place ambitiously, so this colt seems a bit over his head here. But you never know with Guillot and a horse that can be placed on the lead. The connections are strong — Southern Equine and Calumet Farm — and he cost $360K.

Audible: He’s done everything right, progressing through first two NY conditions and then demolishing open company in a first-level allowance. Yes, it was just an allowance, but he shows many positive attributes and he’s comparatively fast in this field. He was a $500K purchase, is trained by Pletcher, ridden by Castellano, and owned by golden owners WinStar Farm and China Horse Club. He has enough early speed and ample late speed. His stakes debut is against challenging company, but I expect him to find the winner’s circle here.

Tiz Mischief: Beaten by a head in the Kentucky Jockey Club Stakes, he essentially duplicated his maiden efforts in a slow race. Unless others don’t improve, I don’t see him winning today.

Pony Up:  He’s an X factor horse — he’s run well on the turf (not great, however) and this is a requisite dirt try to see if he can chase Triple Crown glory. It’s not the fastest field, so if he takes to the dirt, he has a good chance.