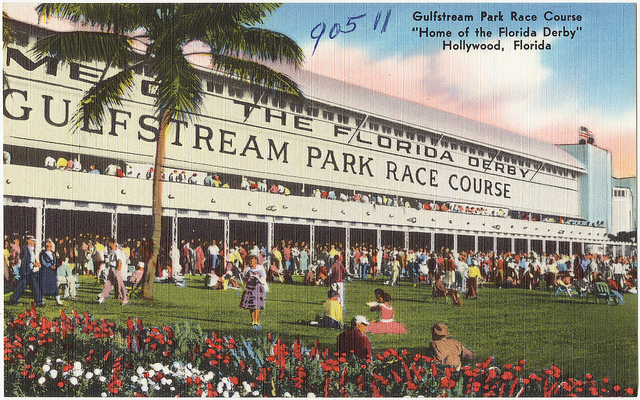 Three final preps for Kentucky Derby contenders today. Each race not only awards 100 points to the winner, but also 40 points to second and 20 points to 3rd. So, the top 2 finishers qualify and the 3rd place finisher is well-positioned, especially if he has some  points already.

We are five weeks from the Kentucky Derby, a relatively standard amount of rest for contemporary thoroughbreds. It was once a “curse” that no one could win the Kentucky Derby off 5 weeks rest, but that was been debunked in recent years.

It’s a rematch between Upstart and Itsaknockout, who tussled in the Fountain of Youth.

It’s a deeper field today, with my eyes squarely focused on Materiality, who has emerged as a Kentucky Derby contender based on his performance at 9 furlongs in the Islamorada Stakes. That’s was at the same track and at the same distance as today. A win here and he becomes a threat to the curse of Apollo; he made his winning debut in early January.

Stanford who ran in the above Islamorada Stakes with Materiality certainly rates a decent chance. His 95 Beyer is still faster than anything that International Star has run this year. As usual, Pletcher is splitting up his very talented army among the east and midwest.

War Story is generating some buzz, but as of now, he hasn’t been fast enough to win a race of this level. He certainly could improve — as could any 3YO this time of year — but I prefer to see it on the track.

There are also significant Kentucky Derby points on the line in Dubai with the UAE Derby. My Johnny Be Good ships over from Tampa, which is good because he’ll give us a sense of comparison after the race.  Here’s a video of the Al Bastakiya, the local prep for today’s race, in which Mubtaahij defeated Sir Fever.

Mubaahij already has a bit of a rivalry — renewed tomorrow — with Maftool.

Enjoy a great day of racing!