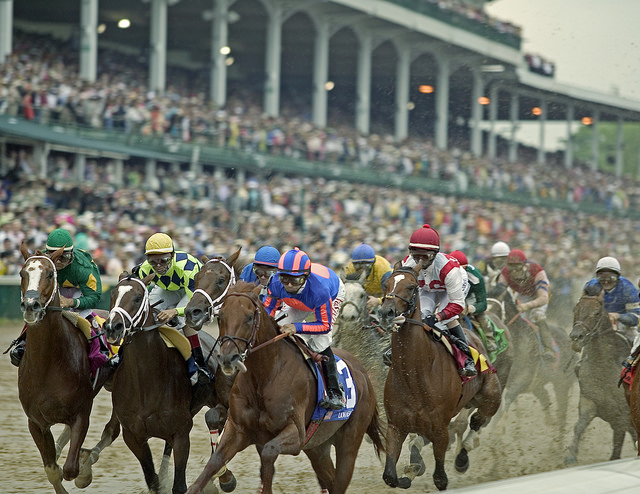 Can a horse of any age race in the Kentucky Derby?

No. The Kentucky Derby is restricted to 3YO horses. High-class horses generally race from about 2YO to around 5YO or 6YO. There are exceptions to this rule, especially if a horse is a gelding. Most horses running in the Derby made their debut at 2YO; in fact, it’s almost a requirement. Since Apollo won the Derby in 1882, no horse has won without a race at 2. You don’t need to win at 2 – just get the experience and (likely) growth.

Because the race is restricted to 3YO, a horse only gets one chance at Derby glory. It’s far from the end of racing – many opportunities exist for horses that may either peak later or missed the Derby due to injury. But it’s a one-shot deal. While horses can’t repeat, trainers can and do. You’ll often see the same trainers around – Bob Baffert and Todd Pletcher come quickly to mind.

Is there a limit to the number of horses that can run in the Derby?

Even still, 20 is a very large number. It’s not that rare for a race to have the maximum — the typical limit for a U.S. horse race is 14 starters. In practice, fans often see fields that are much smaller, about 8 horse per field. In the Derby, there is more potential for chaos and trouble. It’s crazy at the start and creates a whole slew of bad trips – horses that had winning chances but were blocked in traffic. The large field also adds another level of complexity to understanding the races. It’s no coincidence that it’s the race that I (and most handicappers) spend the most time on each and every year. And, it’s wonderfully exciting to watch, filled with storylines and a good chance for drama each year.

Yes. It is one race, lasting just about 2 minutes. That’s it. The Derby might just be the quickest major sporting event in the world, far shorter than, for example, the Super Bowl or World Series or Daytona 500. Yes, there are other races on the day, including the top horses from the other divisions (i.e. turf, older, fillies & mares), but the Kentucky Derby itself happens very quickly. A badly timed bathroom break could force you to miss the entire race.

However, this is a bit misleading. Every thoroughbred born in the United States has Derby dreams, and for those with the talent to match, the process of reaching the Derby begins early and takes years. Qualification forms a regular season of sorts, ranging from September of the previous year until mid-April. I prefer to think of the Derby not as a quick one-shot race, but instead as the culmination of years of preparation and the final stage of a long-term process.

Is the purse large for the Kentucky Derby?

Yes. It is $2 million and is the largest purse for a race restricted to 3YO.

(Races for $1M or more restricted to 3YO. All are Grade 1, except for the Pennsylvania Derby. Purse data from 2014)

What surface is the Kentucky Derby run on?  The Kentucky Derby is contested over dirt, as opposed to grass, or turf, or a synthetic surface. According to the Churchill Downs website, this is comprised of:

(Sandy Loam is made up of sand, silt, and clay and is apparently great for gardening.)

I stuck my hand in the track when I visited Churchill Downs to see if I could gain understanding. Unfortunately, it just felt like dirt.

Some horses who qualified for the Derby may have done it by gaining points on synthetic surfaces. Three races offer points towards the Derby with a race over an artificial surface – The Grey at Woodbine, The El Camino Real at Golden Gate Fields, and the Spiral at Turfway park. This raises the possibility – as was the case with Animal Kingdom’s win in 2011 – that a horse may not have run on dirt coming into the Derby.

There are no turf races that offer points for the Derby; however, it’s not uncommon to see a 3YO horse try dirt in the winter after showing talent on the turf earlier. Stamina (sometimes) moves well between surfaces. But you have to show it on the dirt – fake or real – before Derby Day to qualify.

Why is 10 furlongs important?

A furlong – the standard distance measure in American horse racing is 1/8 of a mile. So, a furlong is about halfway around the track at the local high school. 10 furlongs, or 1 ¼ miles, on dirt, is a bit of a legendary distance nowadays in horse racing. The ability for a horse to maintain speed over the distance of 10 furlongs is a testament to its breeding and training. It is a champion’s distance. It is very rarely run anymore, and 3YO colts get two chances – in the Kentucky Derby and in the Travers Stakes at Saratoga in August. It is also the distance of several races for older horses, and importantly, the distance of the $5M Breeders’ Cup Classic, which often pits the best of the 3YO crop against older horses.

How many horses have run 10 furlongs on dirt prior the Derby?

None. No horse has had the opportunity to run this distance before – the longest race was likely the final prep at 9f. The ability to “get” this distance is part of what makes this race so exciting. So, there’s always uncertainty, even for the most well-bred of animals. The extra distance may not sound like much, but after running over a mile at high speed, every horse is tired and seeking the finish line. It is often these final yards that decide a horse race and the Kentucky Derby is no exception.

The stretchout to 10f for 3YO takes time. Debuting 2YO in April at Keeneland run only 4.5f. The Hopeful, a G1 event for 2YO’s in August, is contested at 7f and the Breeders’ Cup Juvenile at 8.5f. The early preps are at this same distance, with the final preps at 9f. No horse will have tried 10f before the Derby.