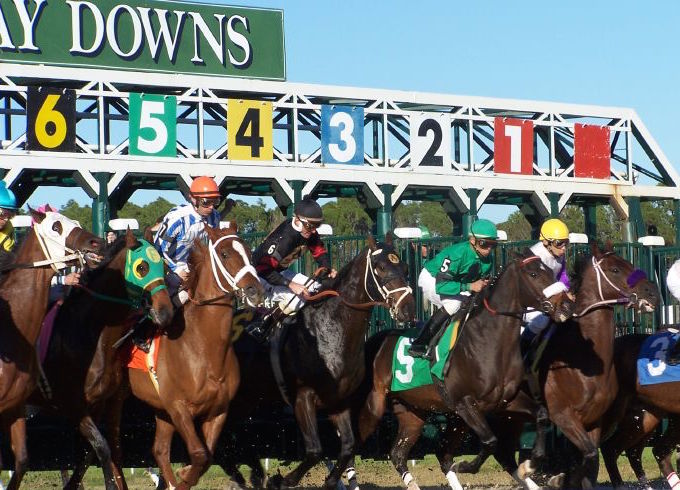 Three Kentucky Derby points races this weekend, with action from Aqueduct, Tampa Bay Downs, and Santa Anita. Races are all scheduled to go off within an hour of one another.

I don’t know what to make of the Withers, in which Far from Over blew the break but came barreling with a head full of steam to win. Visually, it was an odd race; speed-wise, it was about average.

Three runners from that race are in today’s field, including likely favorite El Kabeir, who despite the seemingly bad loss, has still managed to be quite consistent speed-wise.

Lieutenant Colonel had a solid debut at a mile at Gulfstream and very well may be the best in this field. A win here would be nice, but he still is “blocked by Apollo” — no horse has won the Derby without a start at 2YO since Apollo in 1882. It’s not a given, but it is, according to Slate, the oldest curse in American sports. Pletcher enters three for Mike Repole — Blame Jim seems the best shot, although I like the multiple entries — this time of year anything is possible.

Carpe Diem, who I thought was the best 2YO overall last year, makes his much awaited 3YO debut. His last race was a good 2nd in the Breeders’ Cup Juvenile, in which he closed late.

A big win should stamp Carpe Diem as the East Coast Derby favorite. He could run huge. Ocean Knight ran impressively in winning the Sam F. Davis, the local prep for this race, and hasn’t done anything wrong in his short career. And, anything is possible — he has that very important start at 2, saving him from Apollo’s curse. Danzig Moon should appreciate the extra distance here, which is promising considering how well he’s performed so far. Certainly has an outside shot, especially with the Casse/Oxley connections. Souper Colossal reportedly will run here instead of the Swale — ultra-impressive last summer at Monmouth. He tries the class test once again after a disappointing 7th in the Juvenile.

The chart comment for Dortmund in the Robert B. Lewis was “fought back rail, game.” That is, perhaps, the understatement of the year. Passed by almost a length by Firing Line, he rallied in a way that horses rarely do, showing incredible stamina. Granted, Firing Line stopped bad, but this is still something you rarely see.

If Dortmund runs back to that race, he should win and keep his undefeated record intact. But, if he slips a little, three other contenders — each with questions — may finally defeat him. Ocho Ocho Ocho has done everything right so far in his career, including a win in the Delta Jackpot. A son of Street Sense, he still managed to win impressively while sprinting — something I always like to see as it shows both versatility and winning resolve. He’ll need a move forward; something not impossible off the layoff. Bolo has been great on the turf at Santa Anita so far, and he certainly has earned the right to try the dirt. File his start in the “you have to find out” category. If he takes to the dirt, he could very well stamp himself as a contender. The Gomper, despite two straight odds-on losses, shows up here. He hasn’t earned this, but is here based on potential, not performance. In contrast, Prospect Park has earned his way into this race. Once breaking his maiden, he moved forward nicely in beating The Gomper and others in a first-level allowance. He’s certainly one to watch, especially if Dortmund shows any effects of that big effort.