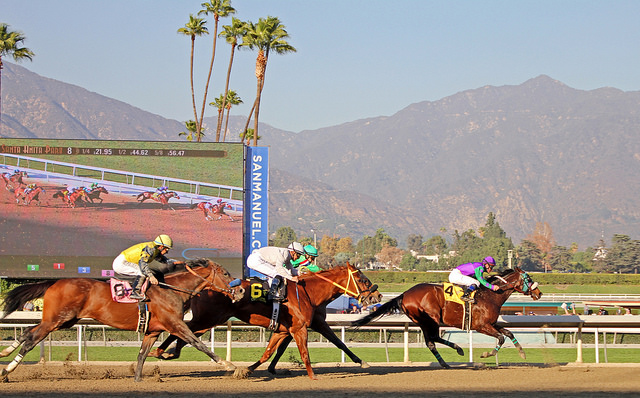 It’s day 2 of the Santa Anita meet. Feels like a double Saturday, with this great long weekend of racing. Two lower-level races to start the day:

Conditioned claimers aren’t the norm in SoCal, so you routinely see horses move among the various class levels for maiden winners. Usually maiden claiming winners with try the starter allowance ($40K) condition, with state-bred and allowance maidens trying their respective first-level allowances, although some trainers alway try a maiden winner in a first-level allowance. Sometimes you’ll see maiden winners go to straight claiming — particularly 3YO claiming with has a solid foothold in SoCal. There’s also a higher claiming price for the same condition ($25K in a N2L); droppers are common.Shippers tend to have a different profile, and some opportunities can sometimes be found there. But the least speedy of the horses on the grounds tend to end up here, a level that tends to be even easier than the open $8K claiming (which isn’t that easy).

Given all of the above, Magna Warrior (#5, 5-2) catches my eye. Been racing competitively in harder, broke maiden claimer at the 50K level, and has the requisite speed. I do have some concern with the layoff. The other main contender is Maholo Arturo (#8, 3-1), who might get disproportionate action on the first-time gelding angle, which just started appearing in the form yesterday. Good thing that we have double probables, which help to determine whether a bet is worth the risk.

Holy Ascension (#11, 7-2) seems to be rounding into winning maiden form, and dirt sprints are, so far, the main profitable expertise of trainer Simon Callaghan.

She’s the fastest in this field on dirt, and I’m banking on a solid effort today against this mostly lackluster field. Powerful Girl (#8, 6-1) earned a second look; her trainer is 0 for 40 recently with 2YO, although we are just a few days short of January 1st. I trust those stats much more through the summer and initial stretchouts. Absent a very live Ju Ju Bella (#9, 4-1), I expect the race to come down to these two and recommend betting the doubles accordingly.

Good luck to start the day at Santa Anita!