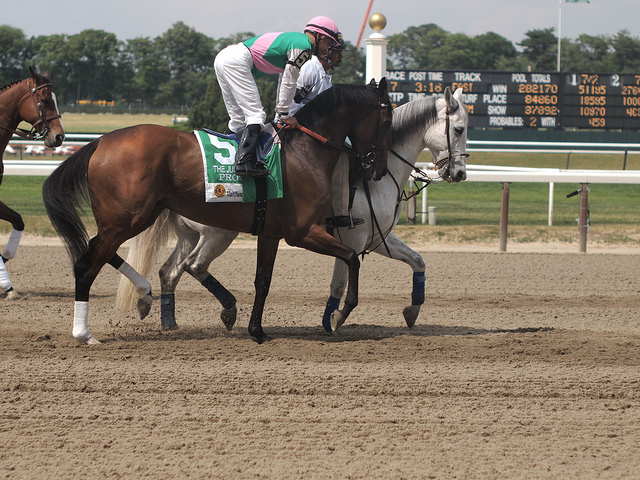 It’s a great field this year for the Jockey Club Gold Cup from Belmont Park. This race is also an important moment in the thoroughbred racing calendar as the 3YO division merges into the older handicap or Classic division. Only two age-restricted routes remaining for 3YO’s, and neither of these is at the top level (Oklahoma Derby and Indiana Derby.) In this year’s installment, it’s a particularly deep field with several good 3YO’s.

My favorite horse of the summer, V-E Day, is among several contenders in this field. I’ve been a backer of him all summer, and he’s certainly helped to pay the rent. In the Curlin stakes, he was my pick, based solely on a form angle that is a consistent moneymaker:

VE Day, which fits one of the few angles that I really trust for form, has opened at 7-1. #Saratoga

I also really liked him in the Travers, and told just about everyone who would listen. He was improving and had earned his way into the race.

It’s going to be V-E day for me in the #Travers. I’ll also put him underneath the other contenders, sans Bayern. http://t.co/hawNahBDyL — Seth Abrams (@alldayracing) August 23, 2014

So, of course, it’s a bit hard for me to be unbiased towards V-E Day. Here, he has a good shot — he’s met each challenge of the summer and seems to have a nose for the wire. If any horse has earned his way on to a P4 ticket, it’s him.

Another of my favorite horses, Tonalist, returns to the site of his greatest triumphs, Belmont Park. In the Belmont Stakes, I was a huge supporter of his, and I am still shocked that he went off at 8-1 (he was even 11-1 before a huge 200K bet knocked his odds down in the gate).

The Belmont Stakes, however, was my only time with Tonalist. I wasn’t on him in the Peter Pan front-running win. But recently, I was a bit skeptical of him at Saratoga:

But now back to a Belmont surface which he seems to enjoy, I’m back on the Tonalist bandwagon, and he’s the second horse on my ticket.

I’ve never been a huge fan of Moreno, but he’s in career form and his speed lately has been lights out. On paper, it seems that there will be a pace battle, but there’s often money to be found (at least in the long-term) on the other side of these opinions. Considering he’s the fastest horse at the top of his game, I’ll include him on the chance that the pace is a bit lighter than anticipated and hopeful that he’ll bring about some value. The final horse to include is Stephanoatsee who will probably be a substantial price. He’s improved since coming to the Nick Zito barn and ran a sneaky good race last out. He’s older, perhaps more mature, and could very well find the board, or even the winner’s circle at a huge price. I’ll also consider a win bet on him (and exacta save), especially if the price is over 15-1. Check my twitter for updates. Finally, I’ll let Wicked Strong, who I rate just a notch below the others, beat me (and he very well might). He’d need to improve, something I don’t like to bet on first-time against older. I’ll also pass on Zivo, the gutsy NY-bred who took the G2 Suburban this past July. This is a much tougher field, and he’d need to run a career-best to get it done.

In the rest of the P4, I’ll go wide in the Flower Bowl with 5 horses: Stephanie’s Kitten, Abaco, Watsachances, Alterite, Strathnaver. A wide open race, I’ll go with Chad Brown’s 3 entrants, along with last out close finishers Abaco and Strathnaver.

In the Vosburgh, I’ll bank on a hot pace coming back to Salutos Amigos or Palace. As an alternative, I’ll also include Happy My Way as the potential speed of the speed.

Finally, in the Hirsch, I’ll go two deep. Imagining might just wire them, but I’ll let him beat me to keep the cost of the ticket in ideal range. Main Sequence has won two straight G1’s and has found his form again. He’s healthy and flourishing for the Graham Motion barn. Finally, I like Big Blue Kitten, who’s been a benchmark horse all summer since winning the key Lure. He’s part of an entry, so I’ll take the free Real Solution, too.